My final day in Korea! I’m already so sad to see it pass by.

I decided this afternoon to do a temple stay program, in which you visit a local Buddhist temple and spend the day learning about life there. In some programs you stay overnight, but this one was a mini version, just 2.5 hours.

I went to the Bongeunsa Temple, a gorgeous temple situated smack in the hustle and bustle of Seoul. It was pretty cool to look around and see these gorgeous, serene temple buildings against the backdrop of the modern Seoul. 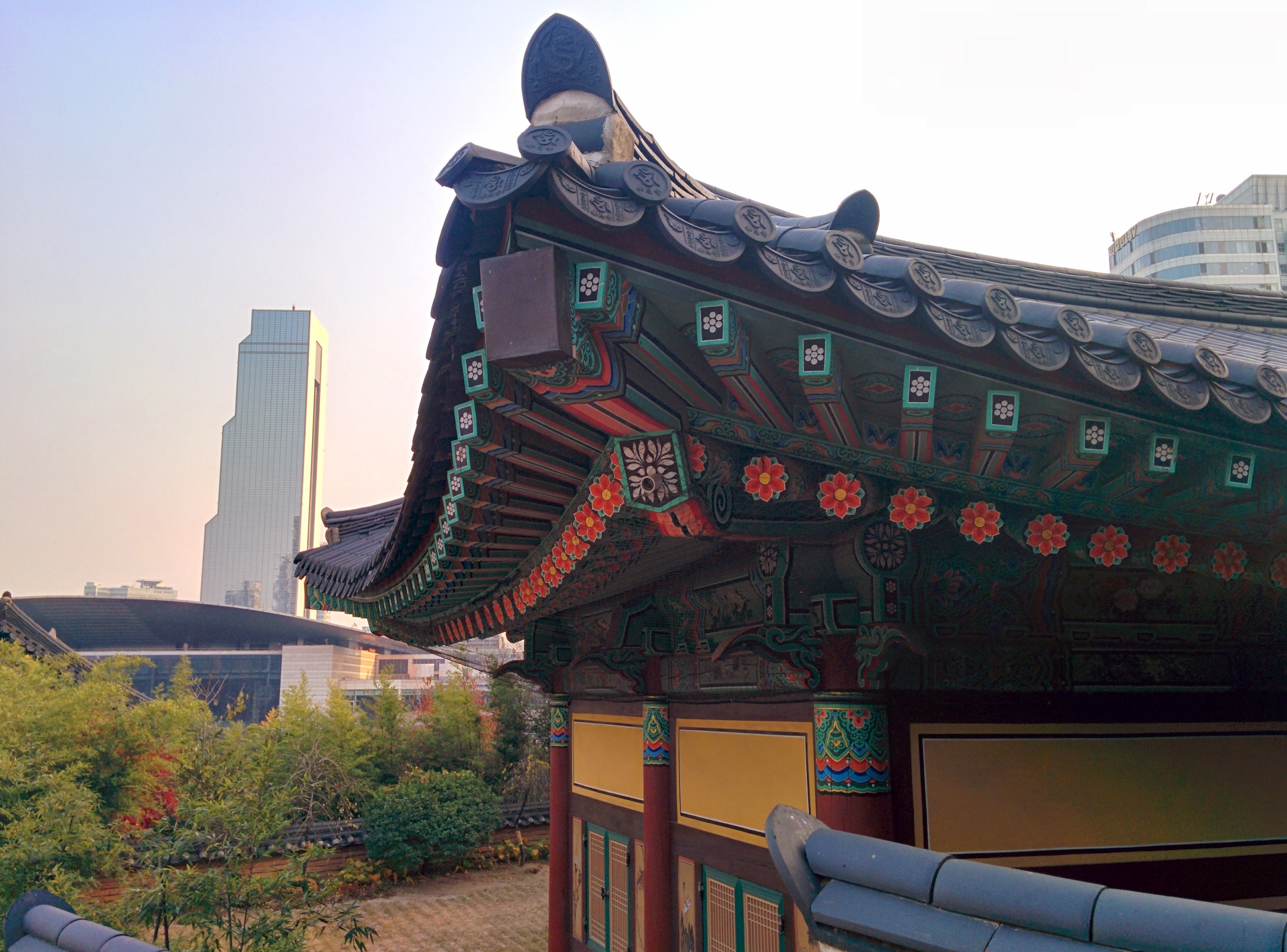 We were given a comprehensive tour of the temple, and some explanation of Buddhism. I have to say, a lot of it went over my head – Buddhism seems pretty complicated. While the tour guide’s English was very good, I still had a hard time understanding some of what she was talking about, so I did feel confused a bit, but most of what I heard was very interesting.

I especially enjoyed the large prayer rooms where the devoted attended to their prostrations. 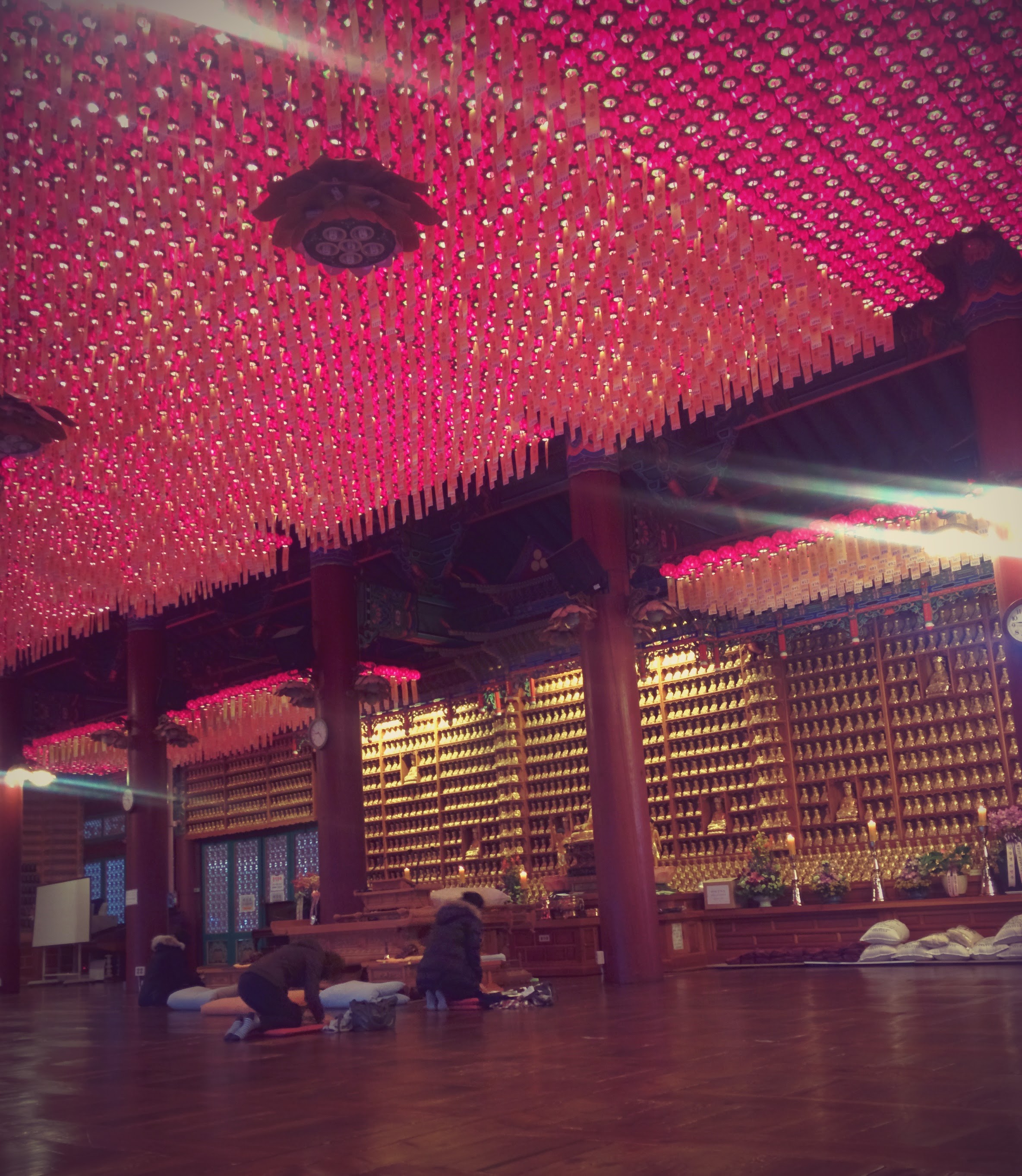 It is so peaceful and calm in those rooms, and I actually quite like the style of prostration prayer the Buddhists do. You stand, bow, and then kneel onto the ground. Then you put your forearms onto the ground, bow your head so it touches the ground, bend at the elbows and lift your hands towards your hears, then come back up into a standing position. (It’s not that complicated, just hard to explain).

I’m not Buddhist, but I think I’d really like to start using this prostration style in my own prayers. They should have pads and ground prayers in Catholic churches I think!

After doing a few prostrations, we attended a really cool tea ceremony. Buddhists have a unique style of tea pouring and drinking that is actually used as a form of meditation. You focus on the smell, the look, and the warmth of the tea, trying to focus on the moment rather than those pesky thoughts that are always rattling in our heads. 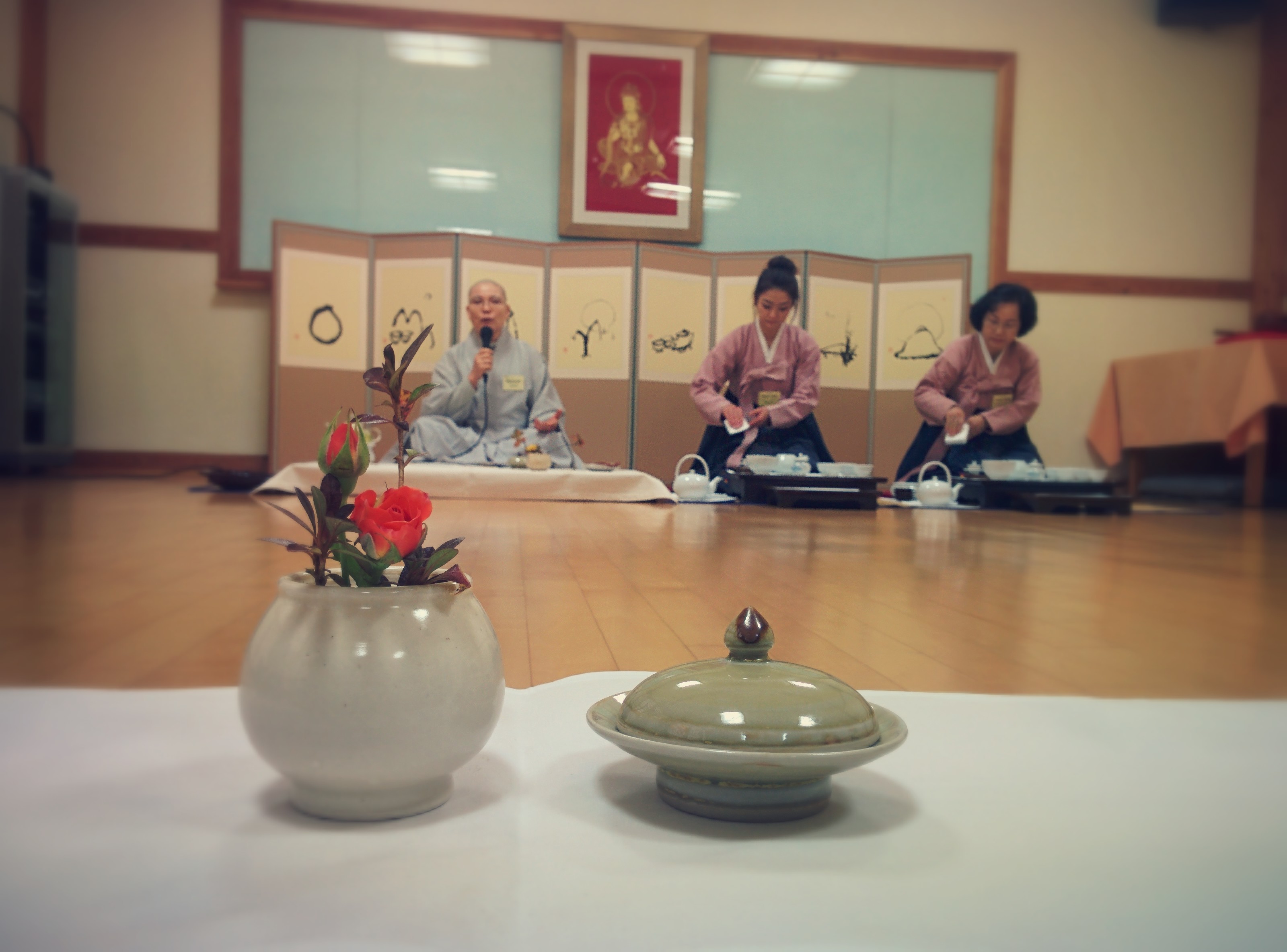 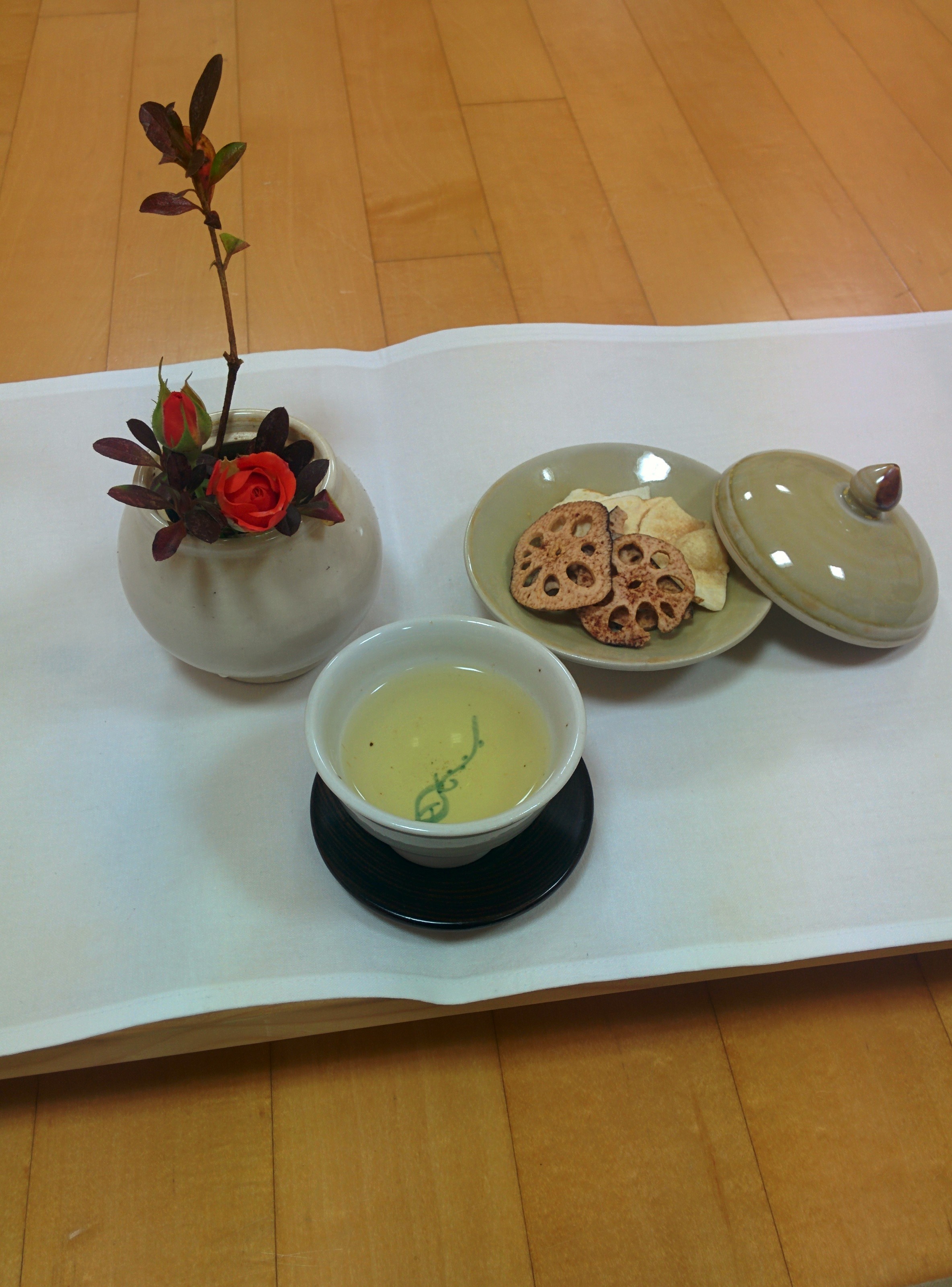 I really enjoyed the tea ceremony. Maybe that’s another thing I can start doing in my daily life!

After the tea ceremony, we went to another room where we made paper lotus flowers. 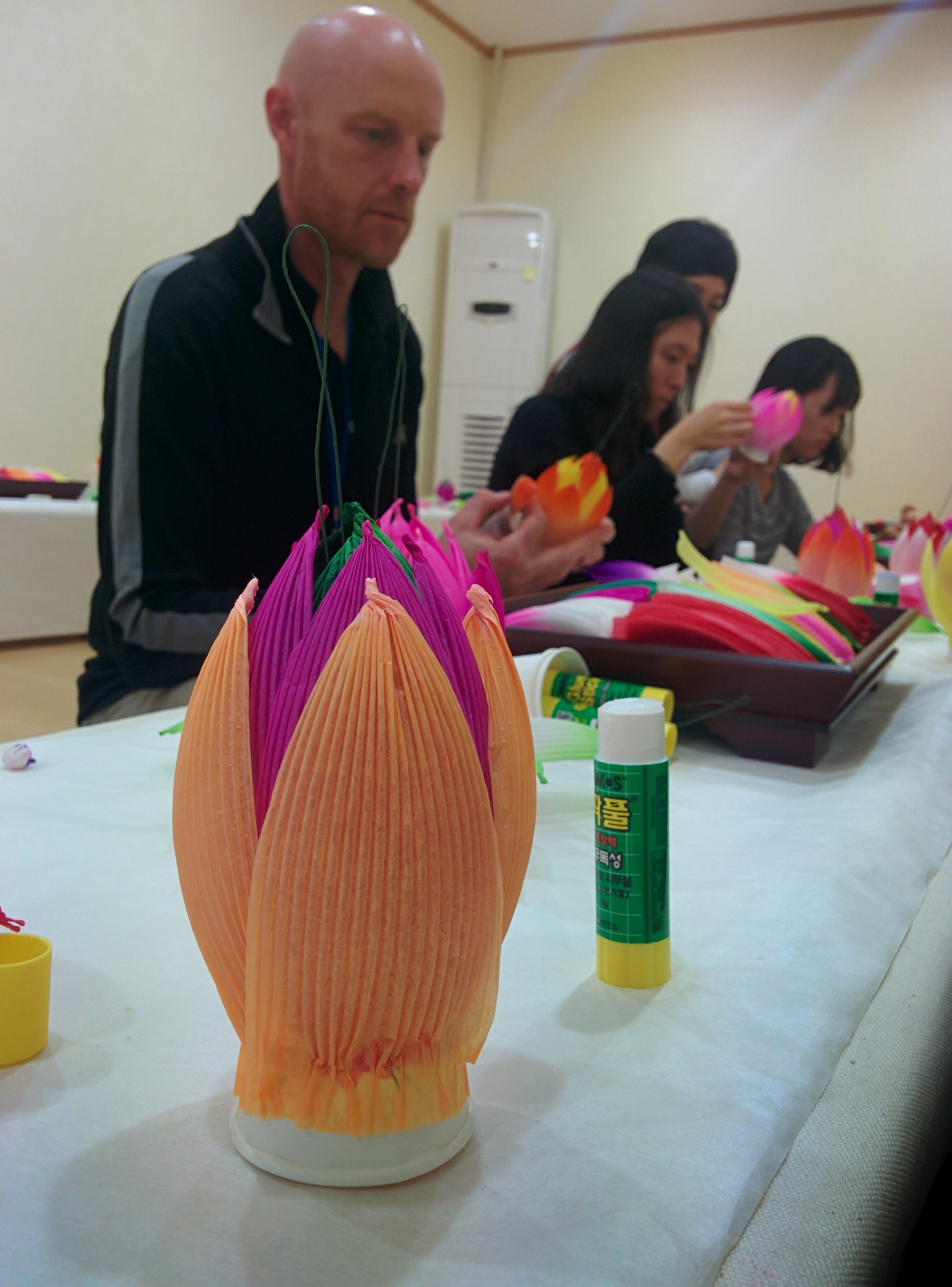 Buddhists use paper lotus flowers like this during special events, as the lotus is a symbol of Buddhism. It’s interesting, I always knew the swastika was a Buddhist symbol as well, but it was still quite unsettling to see the symbol scattered about on the temple grounds. It’s so sad that such a peaceful religion’s symbol could be used for such dark deeds. 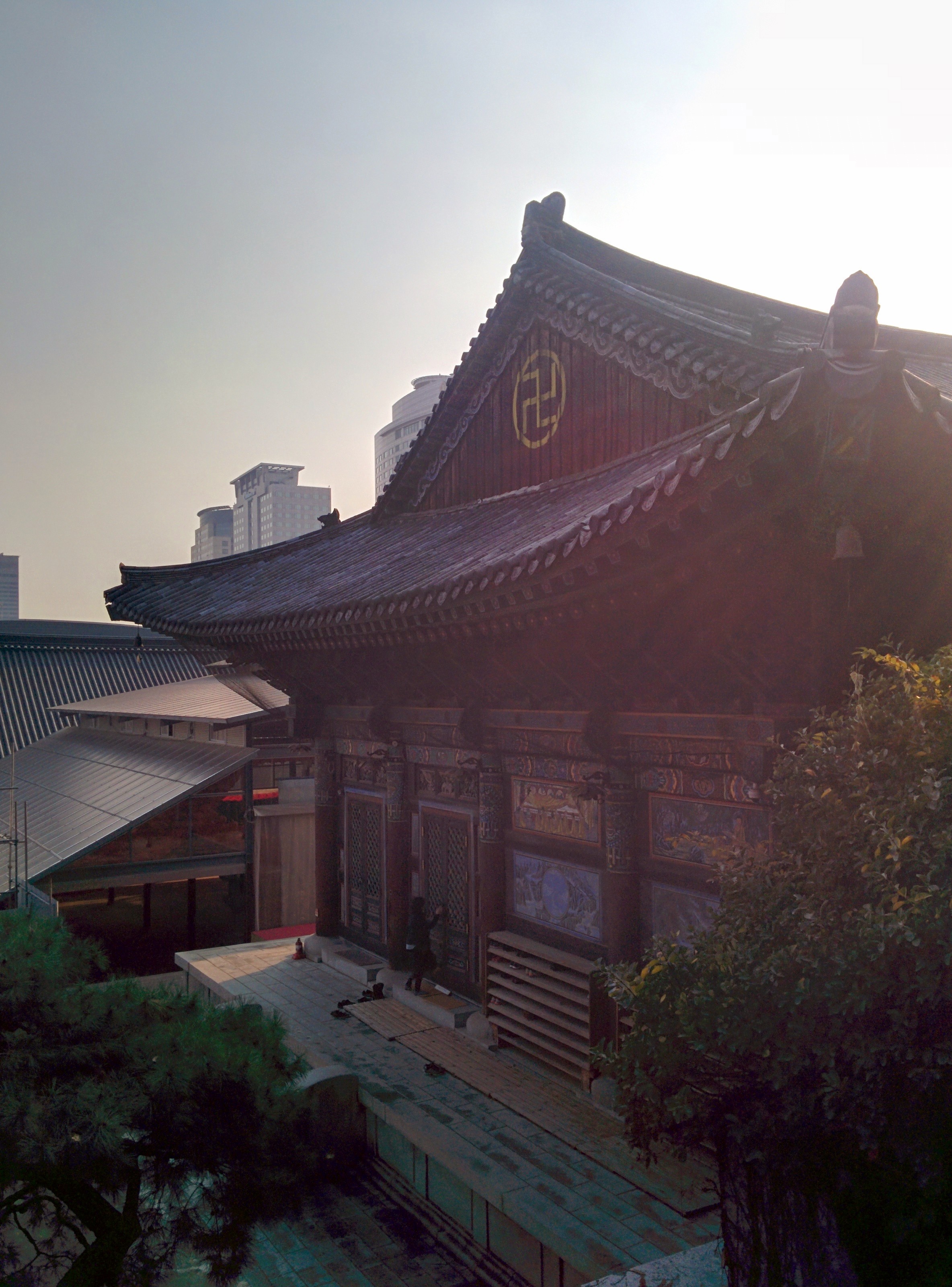 Anyway, the lotus making was quite a struggle for me. I kept doing it wrong, and the women managing the craft clearly took it very seriously, as she kept taking it from me and fixing it, all while mumbling “it’s really not that hard,” haha! 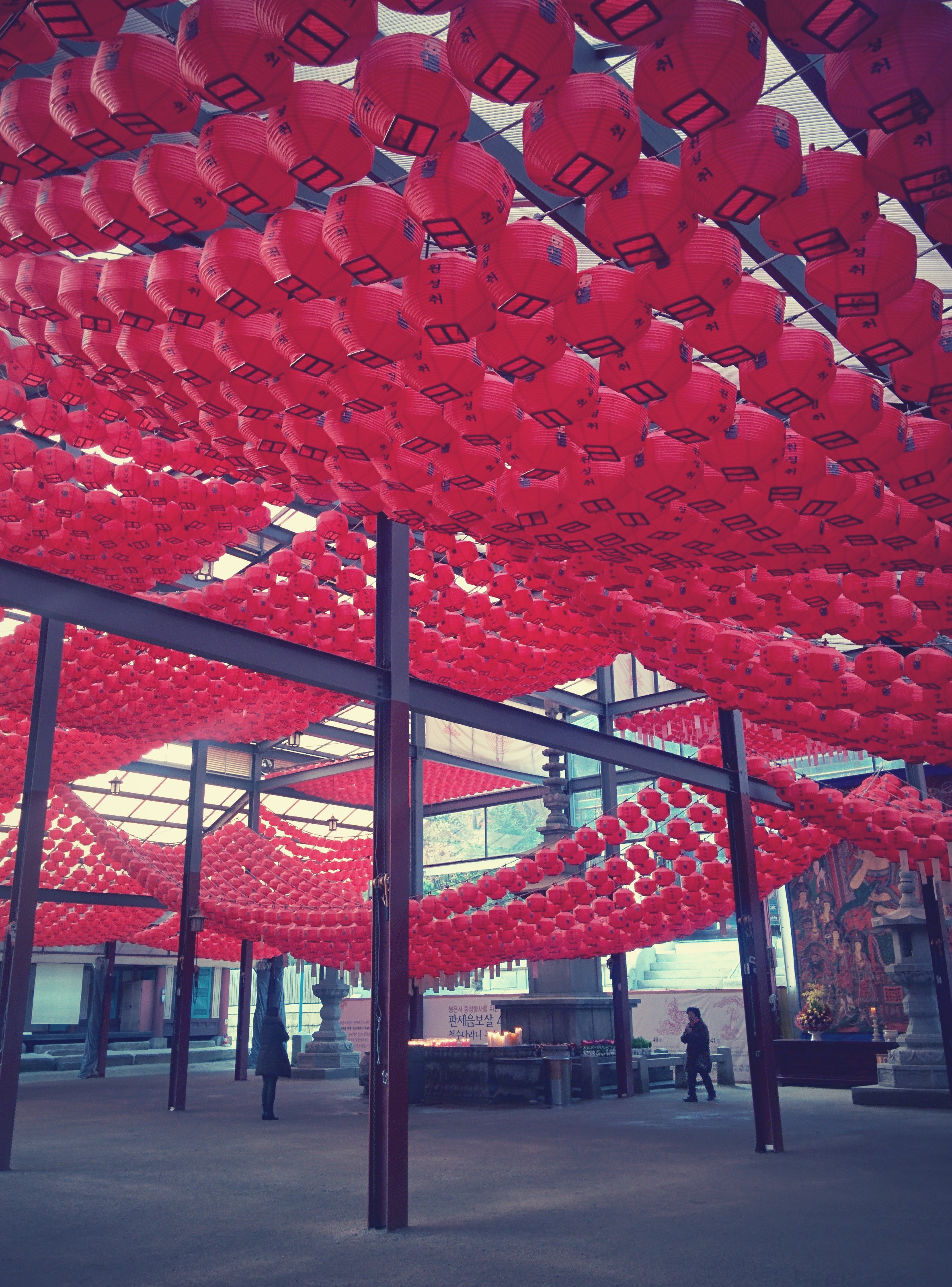 We ended the temple stay with some mediation practice. We were asked to sit on pillows cross-legged style (so funny to think that when I was a kid this was called “indian style”) and practiced breathing in and out. We were to count in our minds to 10, but not let our minds wander. If our minds wandered, we were told we must start the counting over. If we got to 10, we were supposed to simply go back to 1 again. After about 15 minutes of meditation, we stopped. 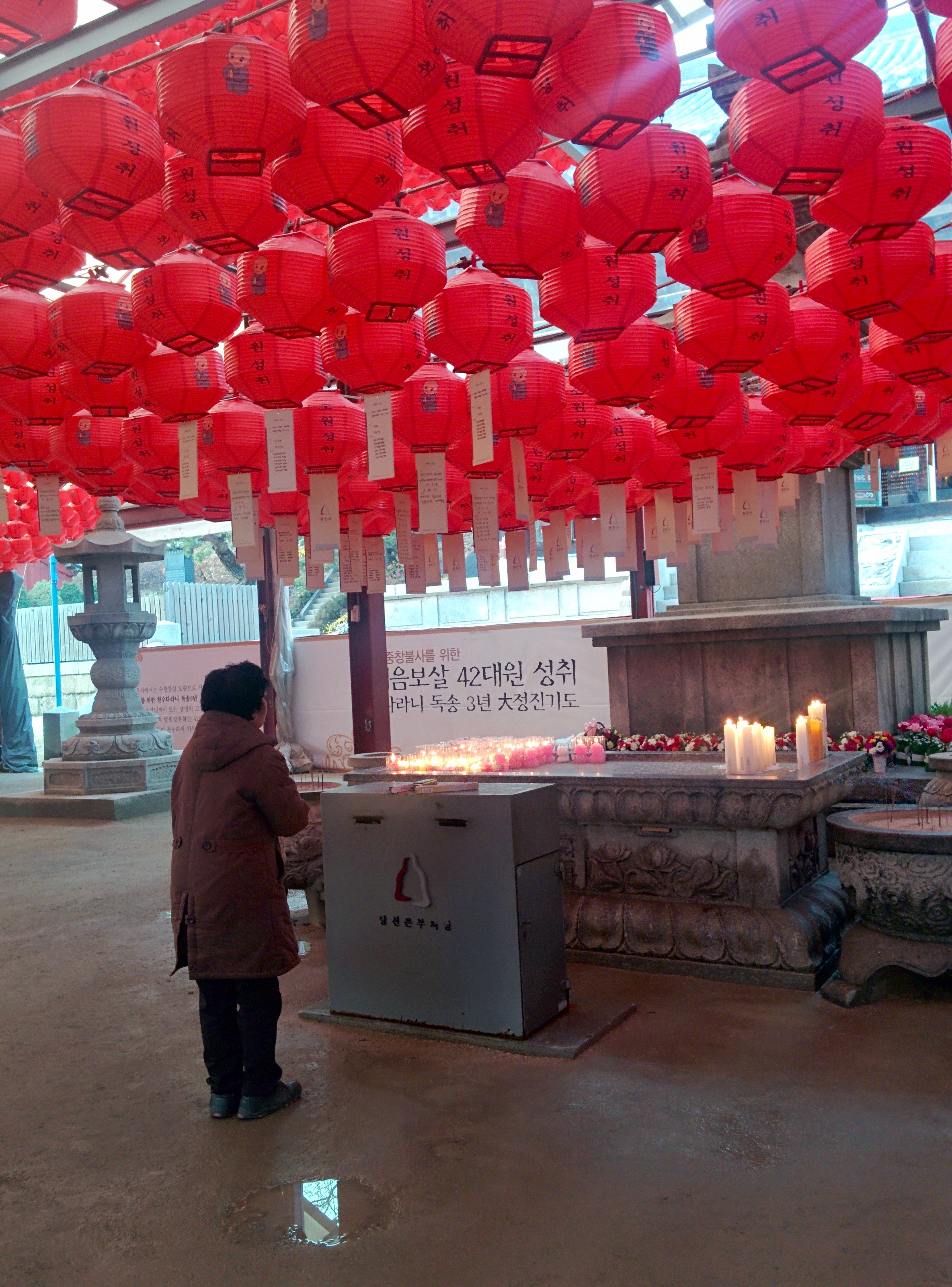 The Buddhist teacher asked if anyone had gotten to 10. Well, I had gotten to 10 twice, but no one else raised their hands! One of the men in our group was very experienced at meditation, and even he said he couldn’t get to 10. Based on this information I decided not to disclose my success….I’m pretty sure I must have been doing it wrong, because I’m captain of the SS. Wandering Mind.

All in all, it was a really interesting experience. I hope I take some of my experiences there and bring what I learned into my everyday life. I really want to focus more on being mindful and living in the present, so maybe these practices will help. 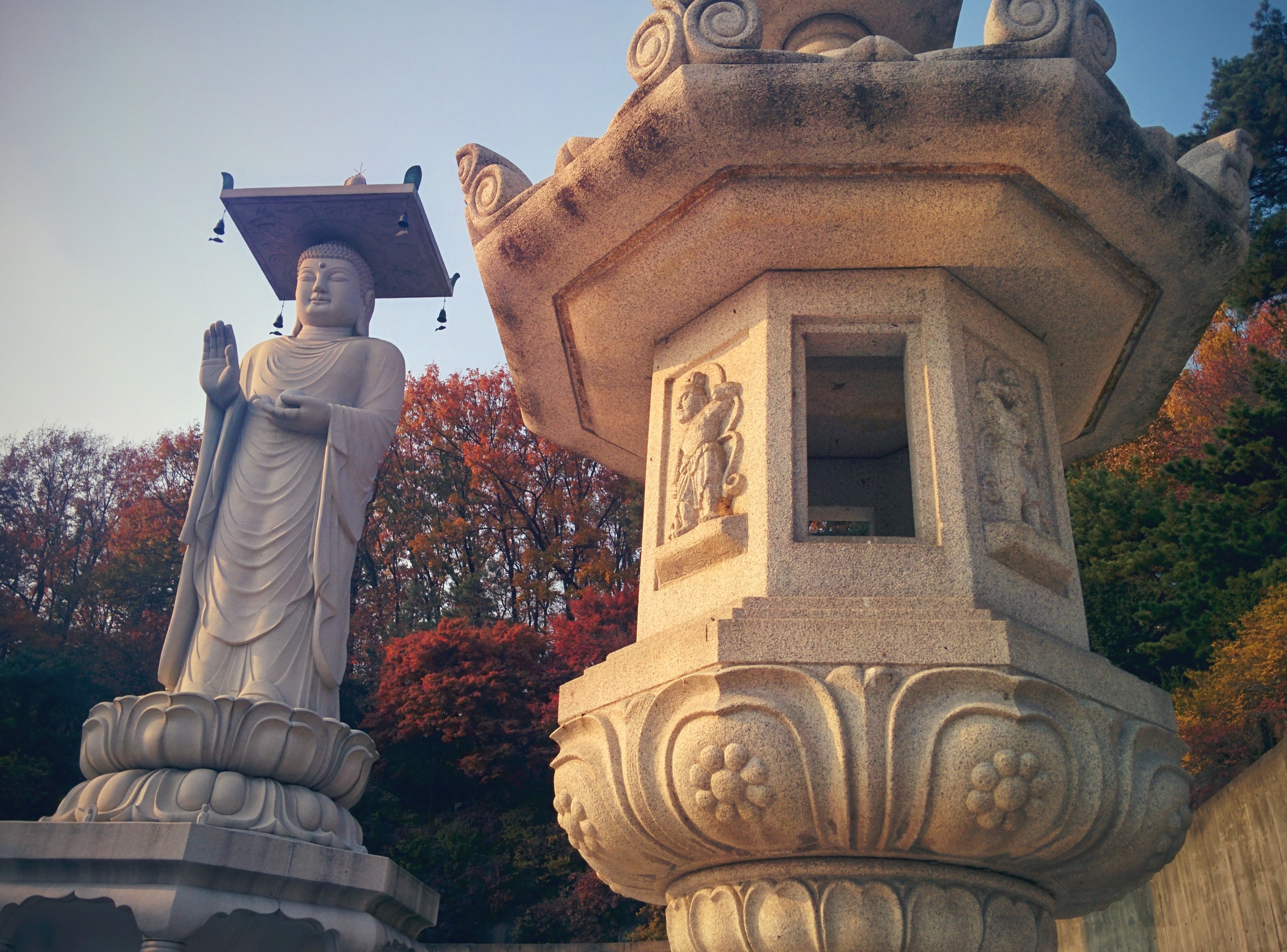 I met up with Jaclyn and we headed back to my favorite restaurant for my last night – Shabu Shabu! We had another delicious Shabu meal and hung out with Oscar and Alvin, two of Jaclyn’s friends. 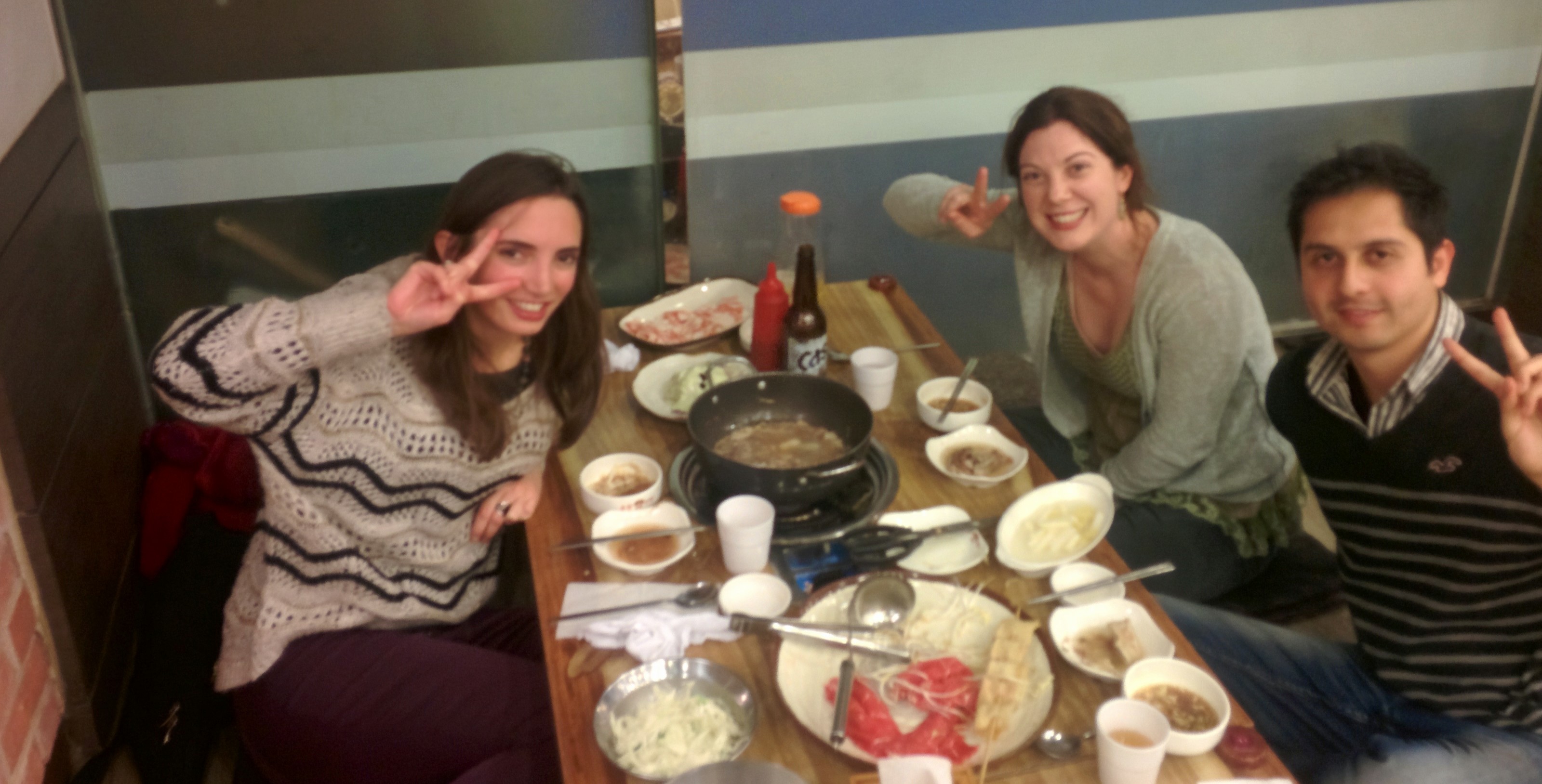 After dinner we went back to Jaclyn’s house and I tried an ice cream sandwich that had red bean paste in it. This was something I was a bit wary off, but it was really good – the red bean paste was quite sweet, not what I expected at all! 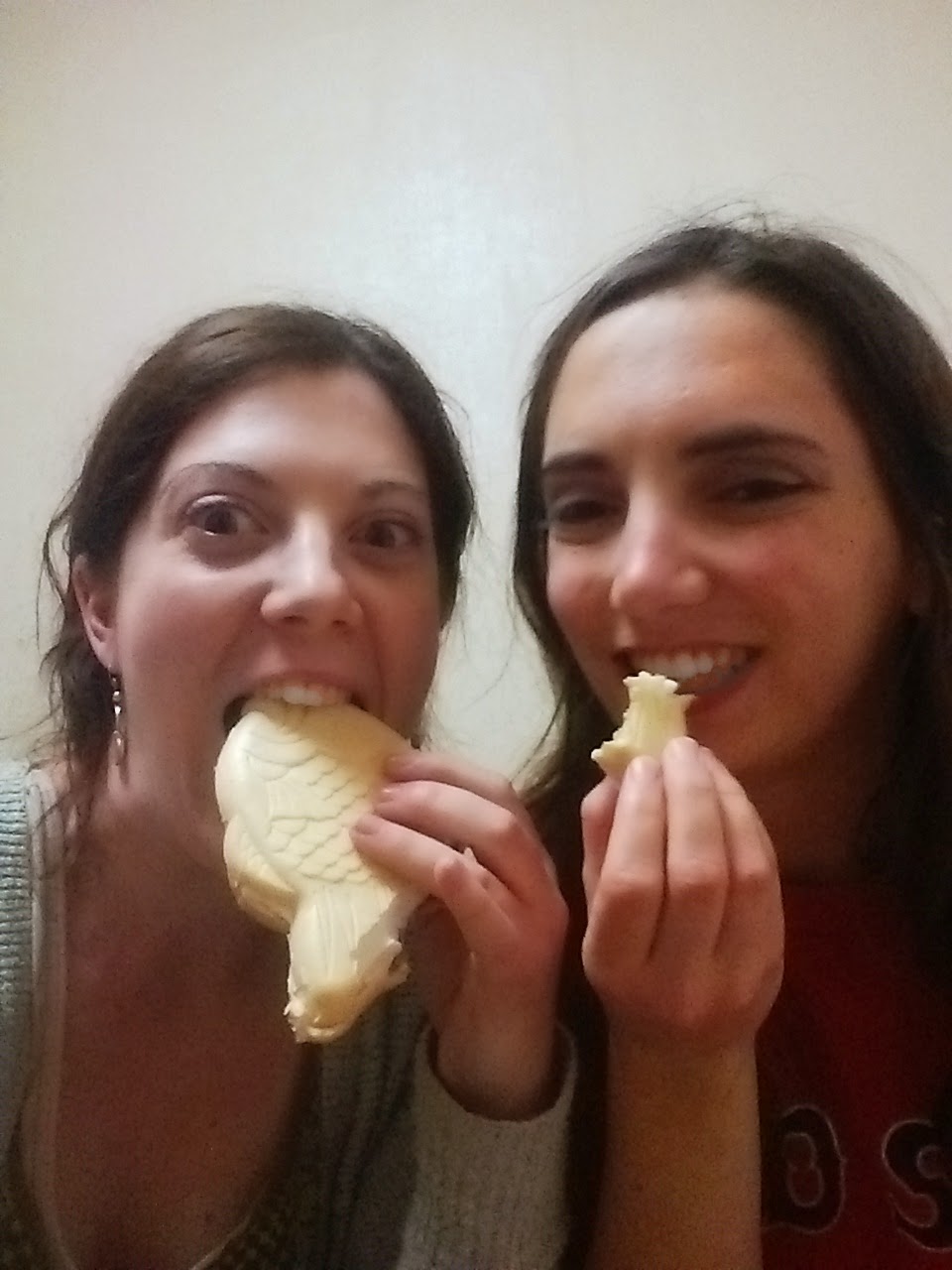